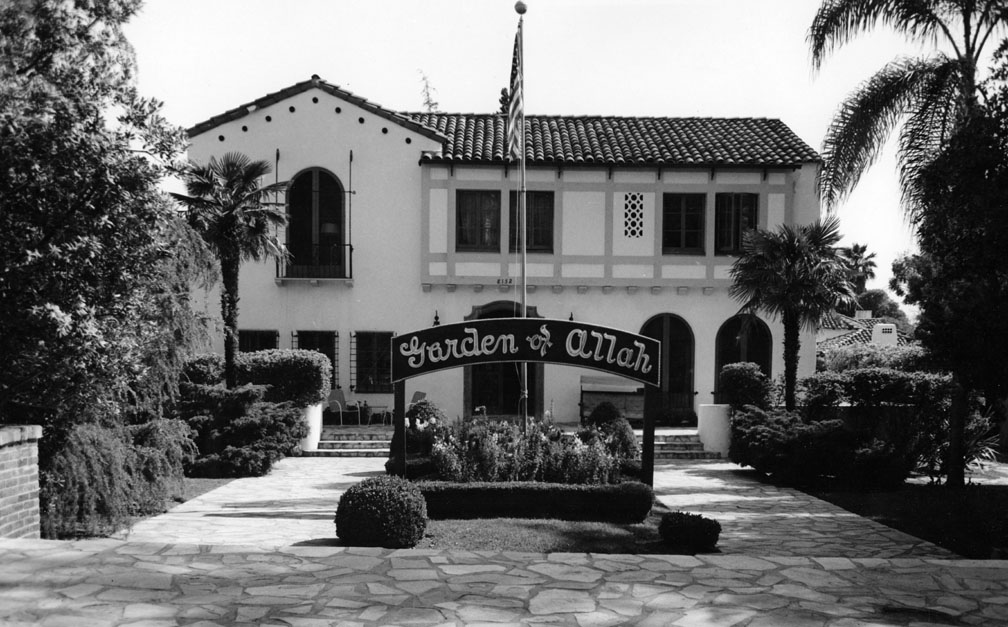 This presentation on the Garden of Allah is organized into six sections. Each section includes stories and photographs related to the hotel, its founder, Alla Nazimova, and its famous guests.

1. Devilish Ambition: Presents Nazimova’s early life and career in Russia, her phenomenal rise on Broadway and much-anticipated entry into filmmaking in 1916. The section also covers the construction of Hayvenhurst, the estate that became the hotel, as well as its builder and original owner, William H. Hay.

2. Tremendously Happy: During the first few years that Nazimova lived in Hayvenhurst, she starred in a series of box office hits and, as a result, found herself at another pinnacle in her career. She also met and eventually befriended a young Italian actor whom she cast to play her lover in her version of “Camille.” Rudolph Valentino would go on to become one of Hollywood’s “immortals,” a star whose legend lives on – while Nazimova, a household name in her day, would quickly be forgotten.

3. Magnificent Hostelry: In the late 1920s Nazimova’s film career began to falter. When money got tight her business manager suggested she convert the estate into a hotel. The Garden of Alla opened in January 1927. It was considered a stylish place to stay or host an event. Two of the biggest stars in Hollywood, Clara Bow and Ramon Novarro, both took villas on a long-term basis. But something went awry financially  that year. A year and a half after the Garden of Alla opened, Naziimova had to sell.

4. Continual Tumult: The 1930s were peak years for the Garden of Allah. Famous writers and wits from New York’s Algonquin Round Table like Robert Benchley and Dorothy Parker made the Garden their West Coast home. Humphrey Bogart, Errol Flynn, Ginger Rogers and other actors stayed there when they were on the cusp of stardom.

5. Martini Time: Life went on at the Garden of Allah more or less as usual during World War II. Gloria Stuart, the actress who would win an Oscar for “Titanic” at age 88, lived there with her husband, Marx brothers screenwriter Arthur Sheekman and their young daughter, Sylvia. Gloria Stuart was known at the Garden for turning food ration coupons into sumptuous dinner parties for her famous, well-lubricated guests.

6. Kismet: The Garden of Allah went into a decline after World War II. The Algonquins had cleared out and, for the most part, the stars had moved on. One who hadn’t was Errol Flynn who made it his home base in late 1950s, which coincided with his own final years. The hotel was sold to a succession of owners. On a warm August night in 1959, over a thousand people gathered there for a party to end all parties. The bulldozers came a few weeks later, and the Garden of Allah met its fate.

THE GARDEN OF ALLAH